The collision-damaged destroyer USS John S. McCain has begun her journey from Singapore to Yokosuka, Japan, where she will be repaired at Seventh Fleet's naval dockyard. She left Singapore's Changi Naval Base on October 5 under tow, bound for a nearby rendezvous point for loading onto the semisubmersible heavy lift ship Treasure. Once loading is complete, the Treasure will carry the McCain north to Yokosuka for repairs to her hull and systems. As of Thursday, the Dockwise-owned Treasure was at anchor just off Tuas, Singapore, attended by the tug Posh Guardian.

In preparation for the journey, the ship's crew, assissted by divers and technicians, assessed the damage and put McCain's systems in layup, the Navy said. The Navy’s salvage team also welded a steel patch over the damaged section of McCain’s hull in order to restore watertight integrity. 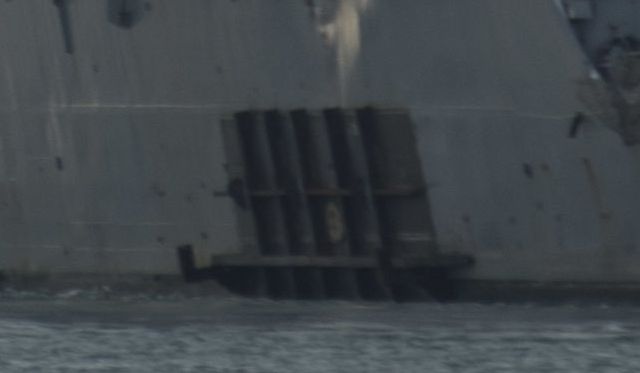 The patch on McCain’s hull (USN)

On the morning of August 21, the McCain was involved in a collision with the merchant vessel Alnic MC while underway off Singapore. Significant damage to the McCain's hull resulted in flooding to multiple compartments, including crew berthing, machinery and communications areas. Damage control efforts by the crew halted further flooding, but 10 sailors were killed and five were injured. The Alnic suffered relatively minor damage, and none of her crew were harmed.

While the McCain collision resulted in more fatalities than a similar accident involving sister ship USS Fitzgerald earlier in the year, the McCain sustained less physical damage, and the Navy has decided to repair her at its own dockyard rather than send her back to the United States. The repairs to the Fitzgerald will be more extensive, given the severe damage to her systems, and will require transporting her from Yokosuka to the Ingalls Shipbuilding yard in Pascagoula, Mississippi.